“Did you see that Jew nose?” “Did you hear that she goes to church every Sunday?” “Mormons have more than one spouse and that’s weird.” “Don’t all Buddhists have shaved heads and wear robes?” “Don’t you know that Atheists worship Satan?” “Did you know that all Muslims are terrorists?” “All agnostics are indecisive.”

Religious discrimination, although less prevalent in the Bay Area, is a problem that gets in the way of treating each other well.

Even teachers at Carlmont are sometimes discriminatory. Junior Sarah Burry said, “A teacher was talking about answers to a quiz in class and one of the answers was God. The teacher said, ‘If you believe in God you could pick it because it makes sense in the long run, and if you don’t… Well have fun with the whole burning in hell thing.”

At Carlmont, students supposedly have protection from words of religious discrimination in the Respect Policy, which states: “Any physical, spoken, or written act of…harassment…whether the act is deliberate, intentional, or unintentional or if it is directed toward an individual or group in regard to…religious ideology.” Even with this policy in place, discrimination towards many different divisions of Carlmont still exists.

“When I was walking outside of school a guy stopped his car, full of him and his friends, and rolled down the window. They said ‘Hey look, that’s the terrorist that [goes] to our school’ then drove off,” remembered sophomore Hiba Dahbour.

Comments that students hear in the hall or in class that pertain to religion are sometimes rude, untrue, and hurtful. Some students are not completely accepting of all other religions, and some make crude remarks such as: “You’re such a Jew,” when another student picks up a coin.

Senior Tereza Dvorakova added, “People should be perceived as individuals free of presumptuous judgments that are merely based on their religion.”

In the Bay Area people are exposed to a wide variety of groups of people, and that leads people who have grown up here to be more liberal in their thinking and tolerant of other groups of people.

“I feel that religion…should never be followed so strictly. All religions started in old versions of languages, so how we translate them today could be completely incorrect. Overall, I feel religion should either be practiced freely and openly, or religion should be illegal,” said junior Danny Akkel.

Even students who are in the majority religion of Christianity still hear judgemental words come from other students’ mouths if they mention that they are religious and attend services on a regular basis.

Intent behind words or actions also affects the reaction to discrimination. While most students would find certain stereotypes rude and discriminatory, other students are okay with their close friends joking about those stereotypes because they know that they don’t have a malicious intention. In a situation like Dahbour’s, the intention was most likely to make her upset or uncomfortable, and therein lies the problem. Sometimes being able to figure out the intention can cause issues.

People who responded in a poll that they are very spiritual seemed uncomfortable to admit that, even while in a one-on-one interview. Some of those students even looked around as if to see if someone was going to scrutinize them.

This insecurity that students have is an issue that needs to be dealt with. Any student should be able to talk about their religion or beliefs without fear of judgement.

The open-mindedness of students needs to become normal throughout Carlmont, and students need to understand that they are safe to talk freely about their beliefs, but that they need to respect others’ beliefs too. 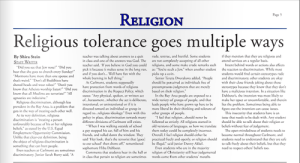