Junior Kalila Kirk said, “I think the word faggot is horrible and disgusting. Any time you use that word it is full of hate and you are showing that you are disrespectful to other people. To use a hate word against someone who is gay implies that you do not respect them for who they are. When you learn to speak without hate, it creates tolerance in your mind and in other’s minds.”

Faggot is one of the most derogatory terms in our society, so why do people still use it? Today, when marriage equality is in the Supreme Court and on the news every day, how can people still be insensitive?

Same Love by Macklemore has lyrics that say, “Call each other faggots behind the keys of a message board/A word rooted in hate, yet our genre still ignores it/Gay is synonymous with the lesser.”

Counselor Theresa Torres said, “In my mind there are two different types of students who use that word. Some are immature, used to hearing it, and don’t know what it means. Then I think there are other students who have issues around this subject, like hate language they have heard at home, or they are insecure about their own selves.”

“Often, people who use that word are not using it within the context that people are gay, they’re using it as an insult or a replacement for stupid. In common culture, it is more of a put down than a factual statement. It’s not a definition so much as a degrading statement,” said sophomore Nathan Klebanov.

While 79 percent of students who responded to an online Highlander poll stated they thought the word faggot is offensive, the other 21 percent do not. This shows that many students don’t realize the true meaning or connotation.

High school boys use the word to describe other boys as less than masculine, which they think will make them seem more like a real “man.”

“Before when that word was said, it was such a hateful word and there was nobody who stood up when it was said. It was one of those terrible negative things that nobody ever talked about. I think things have gotten so much better, and yet I know it’s still said a lot in the halls. Now, even kids who are targeted have a whole group of people behind them,” said Torres.

The origin of the work has changed over centuries from bundle of sticks, to a lowerclassman in Britain, to an ill-tempered or shrewd woman. The first time it was used to refer to someone who was homosexual was in 1914 where it meant sissies.

Faggot was used to mean less than or woman-like, which was not okay in those times. It also could have come from the Yiddish word fagele, which literally means little bird. This reinforced the idea that being a faggot was wrong and too feminine.

English teacher Susan Gold said, “Language reflects and shapes cultural perceptions. To many people, it seems okay to use this word, but it reflects a problem because it is a hateful word. Students need to realize that their words have power.”

California has a law called AB 537, or the California Student Safety and Violence Prevention Act of 2000, which protects all students from discrimination based on sex, ethnic group identification, race, national origin, religion, and mental or physical disability.

“I have teachers calling me all the time asking me to talk to students who have used this language. I keep a record of every student who has used these words and make them attend a counseling session with me. If they have a repeat offense then they can get suspended. I’m not naive and I know the problem still exists, but I feel like we have some teeth in it,” said Torres.

Each person’s background or personal bias also affects how they see the word, but using it associates negative feelings with those who are part of the LGBT community. The power of each person’s words makes an effect on themselves and those around them. 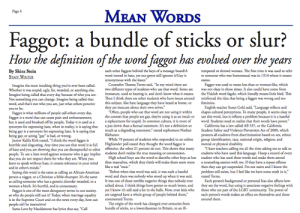