Some people have, at one point in their life, heard a guy say, “But I paid for dinner and pulled out her chair and I didn’t get anything. Nice guys always finish last and that’s not fair.”

This is the idea that pervades the thinking of most “nice guys.” This is the guy who says that women only date the “bad boys” and that women owe men something after going out on a date or going dancing with them.

Some girls today would admit to having experiences not wanting to dance with a guy, but not wanting to be a prude and say no. This view of women by men causes women to not feel like they are allowed to express their true opinion, lest they be called rude names for “leading the guy on.”

But, if these women don’t protest and they allow the men to have their way, then they are called loose and said to have no morals.

There are two different types of nice guys. The “nice guys” that I am referring to are the ones who are motivated by their want for sex or a relationship. The other type is the actual nice guy who is kind just because he wants to be, and he doesn’t have any ulterior motives.

Being respectful to someone does not mean that they owe you something.

This kind of nice guy can misinterpret the situation with a woman and think that they should be given what they want because they treated the woman with human decency.

This view that this type of “nice guy” holds is one that sees women as an object to take care of and then abuse. Some say that women are only worthwhile when they are putting out.

The problem is that many “nice guys” don’t realize the damage that their view does to themselves and the women and girls around them.

The idea of the friend zone originated from the television show “Friends” in 1994 while Ross was pining over Rachel. Joey told Ross that he was running out of time to change their friendship into a relationship and said that Ross was the “mayor of the friend zone.”

Part of the problem is that society and the entertainment we watch perpetrate these ideals. Shows like “The Mindy Project,” “New Girl,” and “Friends” are some that perpetuate this stereotype of the nice guy getting the girl.

Even shows like “How I Met Your Mother” show the main character, Ted Mosby as a man who time and time again is turned down by beautiful women or who ends up dating the wrong girl. In the end he marries his “perfect girl,” but [spoiler alert] he ends up with the woman he wanted since the beginning, who only saw him as a friend for so many years.

These nice guys think that by being placed in the friend zone they are being told that they are not good enough for the woman to see as a potential boyfriend. They think that the friend zone is an excuse for women to not say their true feelings, but it is a way for the woman not to lose their relationship entirely when she doesn’t feel the same way as him. This damages their pride and feelings, which is why these friend-zoned guys will sometimes talk badly about the woman who friend-zoned them.

Songs like “Nice Guys” by YouTubers Chester See, Ryan Higa, and Kevin Wu say that the “nice guy” will never get the girl unless he becomes a bad boy.

But, the public sees time and time again that guys who think like that don’t get girlfriends. Wu said in a video on his channel KevJumba six months ago that: “[he’s] 23 and [he] hasn’t had a girlfriend in over three years.”

Ironically enough, the video for “Nice Guys” debuted in 2011, so since he said publically that he bought into “nice guy syndrome,” he has not dated any girls. Who wouldn’t want to date a guy that believes women owe them something for being decent in the most basic way?

Let’s look at the word nice. When a girl goes on a date, the her friend will usually ask: “How did it go?” If the girl answers with “He was nice,” then that means she has no interest whatsoever.

Women don’t want a guy who is nice. They want someone who is more. Nice is seen as a boring word to describe someone who they don’t like all that much.

Just because a guy treats a women with respect does not mean she owes him anything. The “nice guy syndrome” needs to cease. 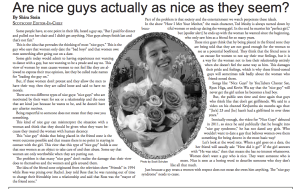